2022 – The Golden Anniversary of the Classic Movie

The Circle Theatres on Pennsylvania Avenue, four blocks from The White House, in July 1972 (Photo by Albert Ihde)

On July 7, 1972, hundreds of bluegrass artists and fans packed the huge Virginia Theatre in Alexandria, VA, for the World Premiere of Bluegrass Country Soul.

During the past two years, bluegrass music has been steadily gaining a more broad-based audience. Attendance at festivals has been up and a good number of those in the audience have been the sort of long-haired, blue-jeaned, dope smokin’ folks you’d expect only at rock concerts.

Part of this is probably due to a gradual falling off of interest in the high-speed mega decibel madness of rock concerts, particularly among older fans who seem to be searching for more deeply rooted musical forms.

But rock music itself has borrowed certain elements of bluegrass, to the point that veteran Earl Scruggs now has a larger following of young people than of die-hard bluegrass fans.

The flowering interest in bluegrass has spawned its first film: Albert Ihde’s “Bluegrass Country Soul,” which opens today at six local theaters. It is filled with good music, good photography and interesting people. But above all else it is delightfully enjoyable to watch.

(To read the full review by Tom Zito, and other reviews, click here.)

Obviously, bluegrass music has come a long way since then. Thanks in part to the burgeoning multi-day festivals that Carlton Haney invented, live bluegrass music quickly spread to nearly every state in the Union.

Bluegrass Country Soul captured this music’s growth at an important turning point. As Sam Bush remembers Haney’s 1971 Labor Day Festival – “That was the weekend it all changed.”

Many of the most notable pioneers of the music shared the stage with upcoming young artists who were leading the way to what would soon be called “New Grass:”

Looking back with the advantage of a half-century’s perspective, we can watch Bluegrass Country Soul to measure where bluegrass was, and where it is today.

Many people have only seen Bluegrass Country Soul in short clips posted by fans on YouTube. But if you have the opportunity, every bluegrass lover should watch the movie with others, in order to recreate much of the festival-going experience.

Now, with the newly restored 35mm print, high definition 4K and Dolby enhanced surround-sound, the movie is back, and can be enjoyed now and by generations to come.

Celebrate the Golden Anniversary of this classic film’s release with our multi-media collection (DVDs, CDs, and book) and share Bluegrass Country Soul with your friends, relatives, and co-workers. It makes a perfect gift all year round.

Subscribe to the BGCS Newsletter, and receive information about special celebrations throughout this anniversary year.

I hope to meet you at a bluegrass festival, soon.

PS. Does your local library or college have a copy of Bluegrass Country Soul on its shelves? If not, drop us a note and we’ll contact them. 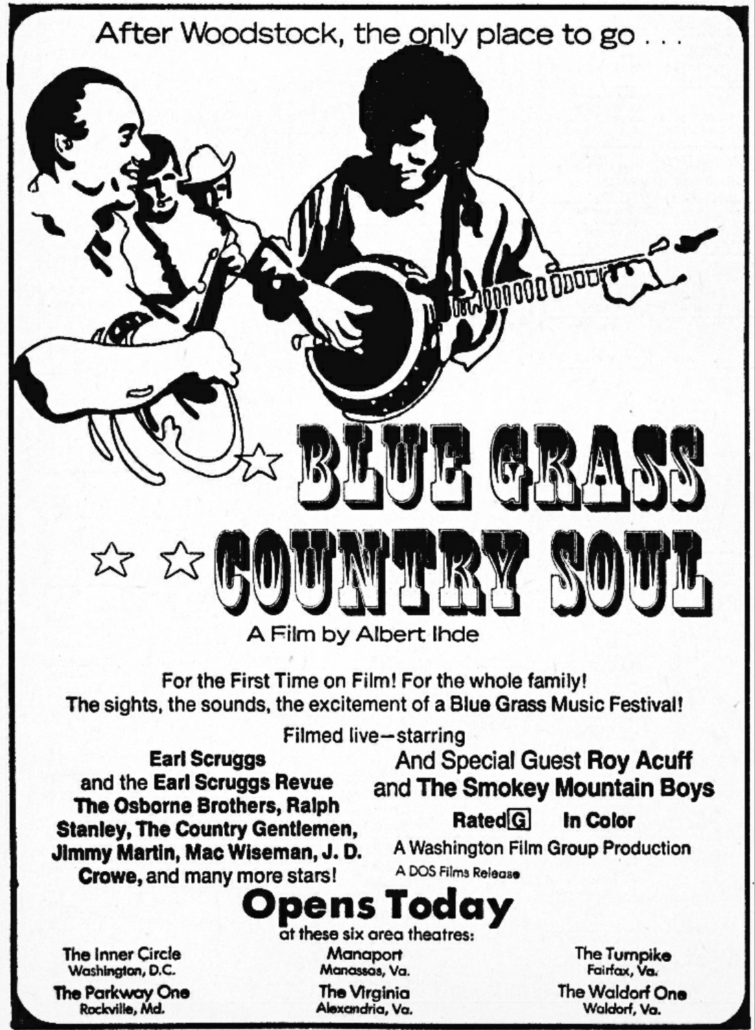 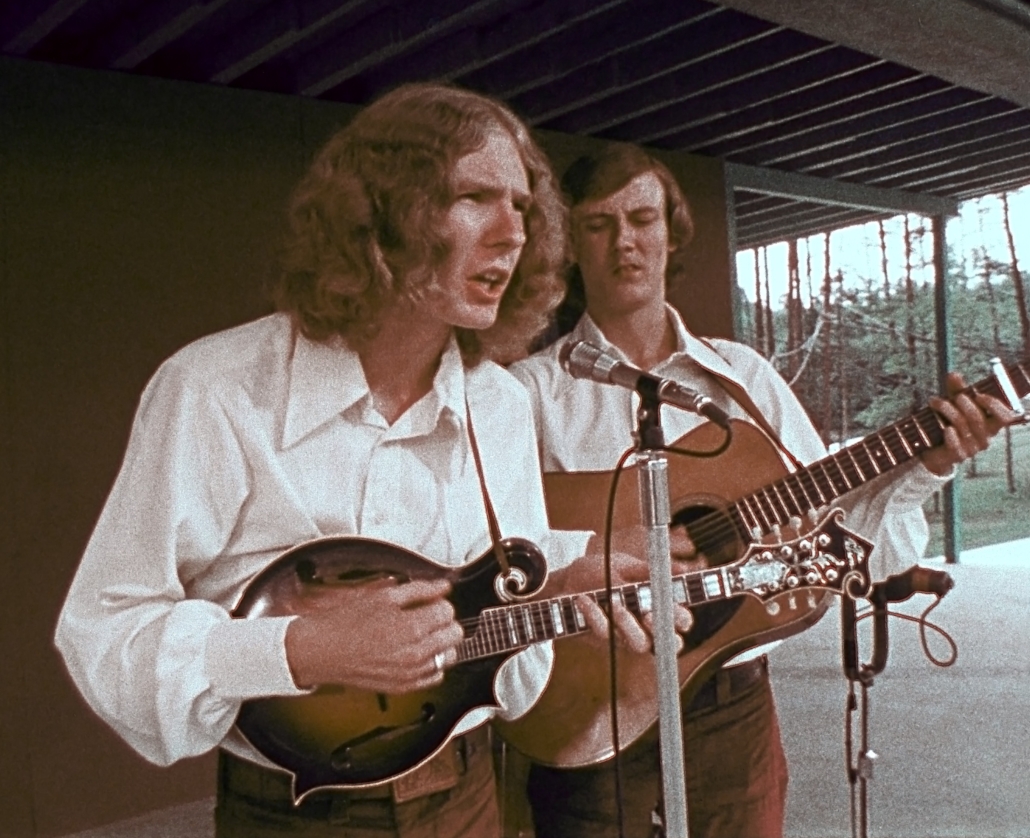 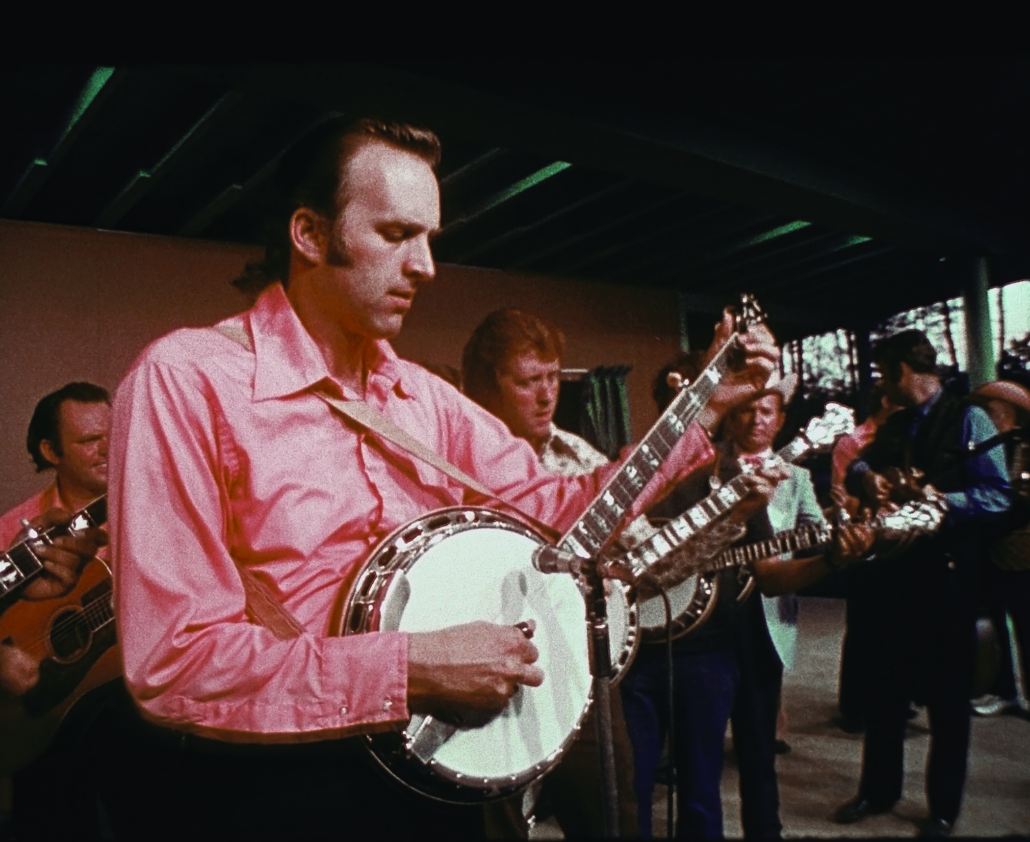 Bill Emerson in the banjo finale 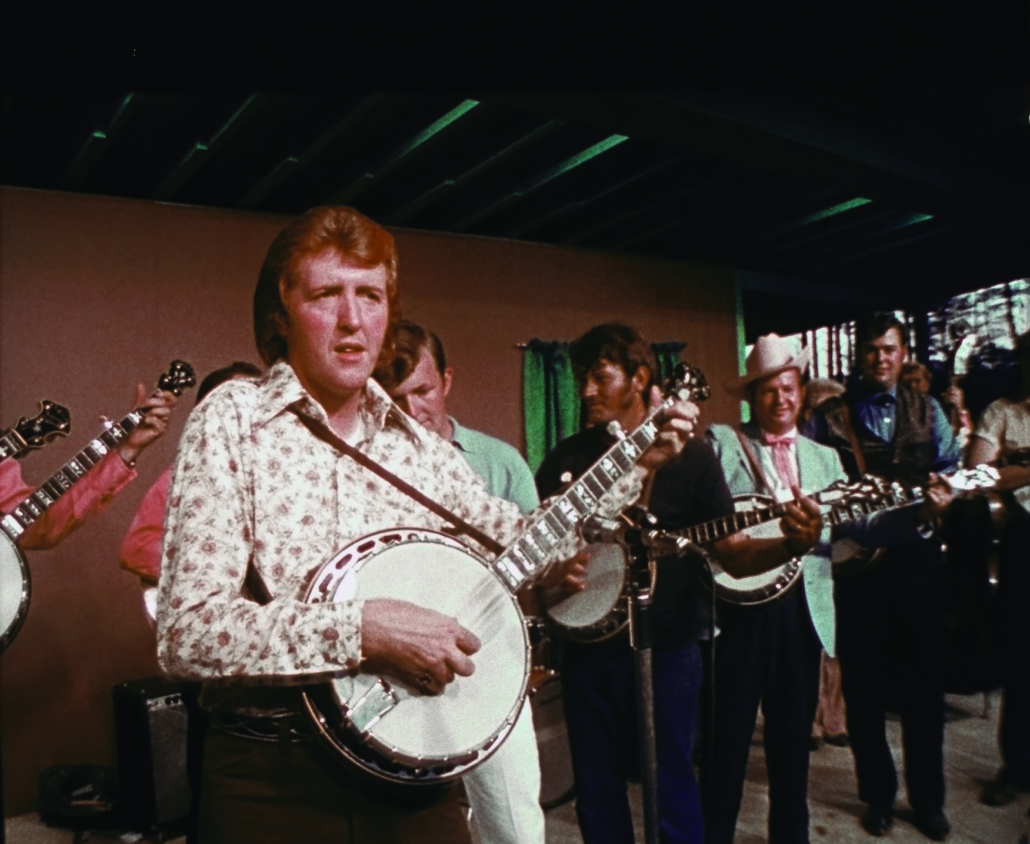 Watch our new trailer and information about our 3-piece set. 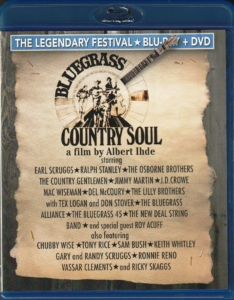 2 – Combo Pack (Blu-ray and standard DVD) plus Bonus Disc. Click on the photo above for video. 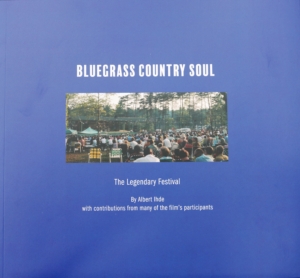 3 – Companion Book. Click on the photo above for video. 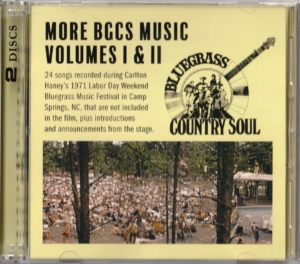 4 – Additional Music. Click on the photo above for video.

The multi-media experience of a legendary bluegrass festival.

1 – The 3-Piece Collection – introduced in the video above

Over 7 1/2 hours of fascinating bluegrass video and audio, plus a 168-page book. Each set arrives carefully packed in a custom mailing carton, containing the Combo Pack (Blu-ray and standard DVD) plus Bonus Disc, Companion Book, and Additional Music, as described below.

A 168-page, coffee table book with hundreds of color photos and information about the festival musicians, telling the stories, many in the musicians’ own words, behind Carlton Haney’s legendary, 1971 Labor Day weekend festival. Includes a reprint of the festival schedule!

Two CDs with 24 songs from the festival stage that were not included in the movie, plus stage announcements, musician introductions and highlights from the “Muleskinner News” awards show.

Your purchase helps to make this restoration project possible!

(US purchases include free shipping. For international sales, please choose “Outside the US” in the shopping cart.)

IT’S IN THE CARDS!

Announcing, for the very first time, a commemorative deck of playing cards featuring some of the greatest icons of bluegrass & country music.

Here’s the perfect gift for the bluegrass music lover who has everything. You’ll find a different still from the movie on the back of each of the 54 cards in this poker deck. Your purchase of this unique gift will help defray some of  the costs of restoring our film and donating an archival copy to the Bluegrass Music Hall of Fame & Museum in Owensboro, KY.

Examples of just a few of the photos in the 54 card deck.

A selection of a few of the stills on the backs of the playing cards. 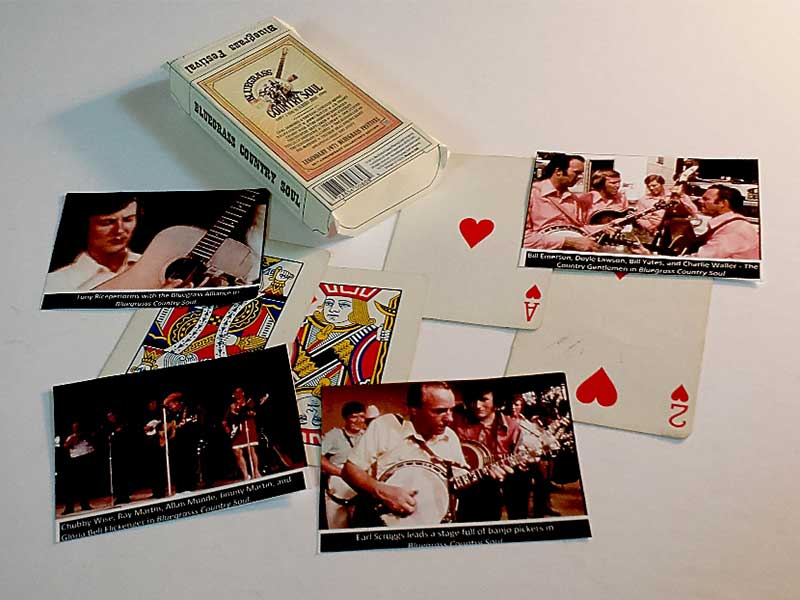